Recent advances in prototype quantum computers have led to burgeoning interest in experimenting with quantum algorithms. In order to bridge the gap between quantum algorithm specifications and physical quantum hardware, researchers need tools to aid in the testing and debugging of quantum algorithm implementations. This talk will focus on two aspects of this research area:

The first aspect is in providing debugging tools for programmers. Compared to debugging classical computers, quantum debugging is challenging because we cannot obtain complete information about the program state. We propose using statistical assertions as tests that check for expected values inside quantum programs. Using such assertions we are able to effectively debug several benchmark algorithms, including one for the Shor’s factoring algorithm.

The second aspect is in finding new ways to simulate quantum program runs on classical computers. Surprisingly, quantum simulation can be thought as an extension of probabilistic inference on Bayesian networks, a task that is familiar to researchers in approximate computing. In our ongoing research work, we use knowledge compilation techniques from probabilistic inference for quantum simulation. The most notable advantage of this approach is it leads to more efficient repeated simulations on quantum programs differing in only parameters.

Overall, these two research directions are two examples of taking ideas from approximate, statistical, and probabilistic computing, and applying them the closely related area of quantum computer research.

Yipeng is a postdoctoral research associate at Princeton University, working with Prof. Margaret Martonosi. His research area is in quantum computer architecture, focusing on problems in helping programmers write correct quantum programs, and on applying techniques in probabilistic computing in the area of quantum simulation. He is funded by the NSF through EPiQC, an expedition in quantum computing bridging algorithms and machines.

He received his PhD in computer science from Columbia University, under the guidance of Prof. Simha Sethumadhavan. Yipeng’s dissertation work was in applications of analog computing in the area of scientific computing. Along with his collaborators, Yipeng contributed to building Columbia University’s prototype analog accelerator, which has found applications in solving nonlinear partial differential equations. The work sparked interest among computer architecture researchers, who named it a MICRO Top Pick in 2017 and an honorable mention in 2018. He was funded in part through a DARPA STTR grant to investigate commercial applications. 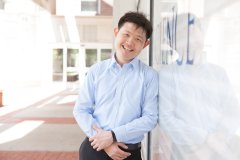